It’s freebie day! Let’s get into these free books.

But first, consider purchasing this Taken from author Victoria Deluis. 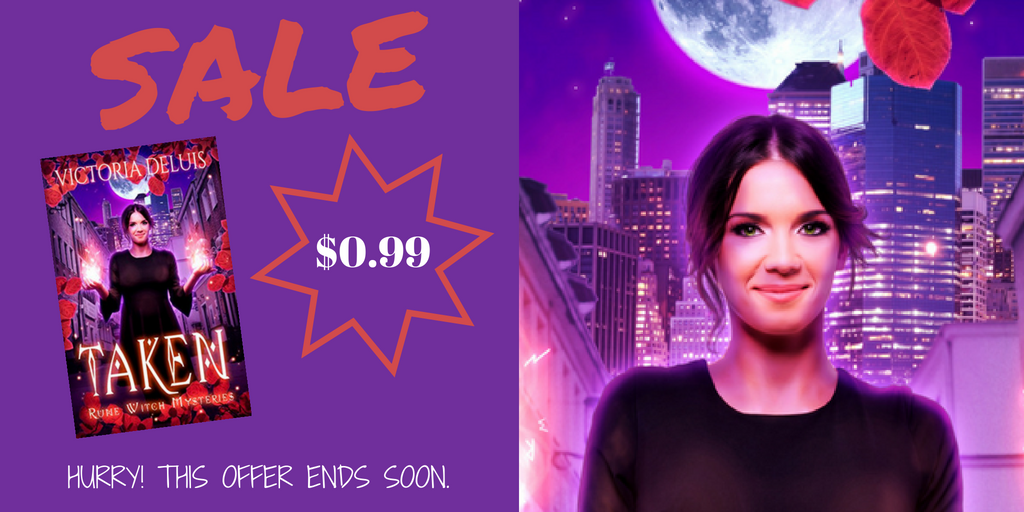 There’s always a price to pay with magic. The question is, who pays?

It was never going to be a simple day: visiting my childhood home and finding the murderer of a house fairy. Whose master happens to be a heartless goblin… Yet, as it turns out, the goblin is the least of my problems.

A lover endangered. A friend betrayed. A memory taken.

The cards are stacked against me but hell hath no fury like an angry Witch.

I’m Summer Daniels and my life is about to change.

The other books in this series are also 99c each so be sure to check it out! 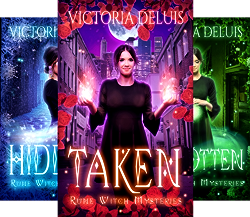 END_OF_DOCUMENT_TOKEN_TO_BE_REPLACED

Today’s freebies are courtesy of Beyond Midnight Volume 1

Dive into the pages of this alluring anthology and enter a world of mystery and adventure. Stalk the streets of sprawling metropolis’ and hunt terrifying creatures. Explore towering cities where the supernatural is everyday and magic is as common as coffee.

Devour 13 all-new urban fantasy stories from debut and best selling authors.
Pick up your copy of Beyond Midnight today and join the adventure.

Get your copy today for only 99c/p

Read on for your free books…

END_OF_DOCUMENT_TOKEN_TO_BE_REPLACED

Enjoy the 4th of July with a good book!

Today’s books are brought to you by Jacky Dahlhaus and her book Living Like A Vampire.

Staying alive is hard in a world full of bloodsuckers. What do you do to survive?

Kate has just begun her new job as a high school teacher and is looking forward to living her suburban dream life. All her hopes and dreams turn into smoke as a virus turns people into vampires, roaming the world in packs and killing everybody they can get their hands on. Kate has to pretend to be one of them to stay alive. When she accidentally bumps into a handsome sucker who then mysteriously disappears, surviving is no longer the only thing on Kate’s mind.

Will Kate stay alive and human while pursuing this mysterious stranger?

Pick up this action-packed, fast-paced, suspenseful novel and explore the depths of Kate’s emotions as she struggles to make sense of it all.

Available at the author’s website, Amazon, Kobo, and Nook.

Read on for your freebies…

END_OF_DOCUMENT_TOKEN_TO_BE_REPLACED

This week’s list is brought to you by LegionBorn

LegionBorn is the first book in the LegionBorn series. If you like action-packed urban fantasy where fallen angels, nephilim, and witches face off with nasty netherworld creatures, buy this book today.

Buy or Borrow at Amazon for only 99c today and tomorrow!

Your freebies lie ahead …

END_OF_DOCUMENT_TOKEN_TO_BE_REPLACED

I was in cave mode last week and neglected to put up a list of freebies. For that reason, this week’s freebie list is twice as long! Here’s hoping you find something of interest and enjoy some good reads.

That being said, FFJ’s Freebies are brought to you by The Paragon, Book 3 of The Nome Chronicles series. Available for sale on Amazon and free for Kindle Unlimited users.

When love turns to hate, is there a way back?

Since her father’s death and the subsequent betrayal, Neith trusts no one. She has learned to be ruthless and will do whatever it takes to defeat anyone in her way. Having once loved Invier only adds to her determination to crush him.

Invier can’t believe the girl he sacrificed so much for wants him dead, and he’s desperate to convince Neith he’s not her enemy. But her threat is not his only concern, nor is she the only one he needs to save. In the end, finding a solution might require him to resort to the very tool he hates—violence—and, he may need to kill the one he loves.

Invier and Neith’s struggles will bring them head to head in a final and deadly showdown as The Nome Chronicles come to a thrilling conclusion in THE PARAGON.

Read on for this week’s jumbo sized FFJ’s Freebies!

END_OF_DOCUMENT_TOKEN_TO_BE_REPLACED

Hope the week is going well?

Today’s freebies are brought to you by The Pursual, Book 1 of The Nome Chronicles –

Neith and Invier are madly in love, yet destined for an unhappy ever after.

Given his family’s low ranking, Neith revives a long-abandoned competition – the Pursual. The prize is the girl and an alliance with her influential family.

Entered into the competition without his consent, Invier becomes suspicious of Neith’s motives. Still, he must win, or see his love married to a rival. The mysterious deaths of competitors, the discovery of dark secrets, and a growing rebellion mean that nothing will come easy.

Will the competition meant to bring them together pull them apart? Delve into this young adult dystopian to find out.

Now $2.99. Get your copy today. Also available at these stores.

Look on for this week’s freebies.

END_OF_DOCUMENT_TOKEN_TO_BE_REPLACED

It’s been awhile since I updated this here blog. Naughty of me I know but there’s been so much going on. *sigh*

If you follow me on Facebook, Twitter or Instagram, then you know I survived Hurricane Maria. It hit the island I live on as a Category 5 storm. A weather gauge located two miles from my home recorded 225 mph winds during the weather event.

Scary! Anyway, all that to say – there’s been a good reason.

And now, I’ve finished writing The Paragon, Book 3 of The Nome Chronicles. Three edits down and it’s been sent to beta readers. Here’s the cover –

It’s a beauty, right? Fine. I know I’m biased but my subscribers were very helpful in getting it to this point. I’m waiting for the final version from my designer. This book will be published in January 2018 and I can’t wait! By the way, let me know if you want to be on my launch team. You’d get a free early copy of the ebook. All you have to do is provide proof of having bought

For some reason, I’m sad but excited for the end of this series. It was a very ambitious project. I originally had ten stories I wanted to publish – three full novels and seven short stories. I have drafted/written/published the following stories in the series

I eventually had to put a halt to The Pact (intended to be a story about the origins of Nome society from the perspective of one of Invier’s ancestor), The Pairing (a story about Lance Singer, Enyama Damil and Adaora Opitz’s complicated and hilarious love triangle) and The Pith (what happens in between The Pursual and The Paladin – didn’t happen because I thought it best to just put that story into The Paladin).

The Premiere has a cover and has been started but I’m not sure when it’ll be released. The Pegasos … I’m not sure of. It’s the story of Torin, the soldier who becomes Invier’s friend in book 2 – The Paladin. I have no idea whether this story really makes sense for the universe though I’m itching to write it. I also have no idea what sort of cover it would have as I can’t put a girl in a pretty dress on it. 😆

And as for The Phalanx, I wanted it to be a story in the future that shows what becomes of the artificial intelligence soldiers that play a key role in the series.

Maybe I’ll get to write these additional stories someday. I truly hope so. But for now, I’m working on two new series.

The first, coming February 2018, is The LegionBorn trilogy. It’s an urban fantasy series with an interesting take on celestial beings and the humans who just happen to get caught up in their battles. Lucifer has a twin brother whose son might be the subject of a prophecy that could spell the devil’s downfall. As you can imagine, family ties mean nothing as Lucifer wants his nephew dead. Immediately.

The second, coming April 2018, is The Excelsia series. I’ve been working on this universe for almost five months. It combines my love for strong female young adult characters but is set in space. Think a young girl in a universe that’s controlled by powerful corporations, religious zealots and underground elements all in a quest for control of the future of humanity.

And that’s it for now. Let me know if you are interested in joining the launch team for any of the upcoming books I’ve mentioned. I’m looking for folks willing to read an early version of each book and leave their honest reviews when each of the books are launched.

Now, twirl on that and have a great fourth of July!

Oh, and THE PURSUAL is free today! Woot Woot! Go get your copy here.

There are 10 books up for grabs to a luck winner of The Dark YA Fantasy Book Giveaway. Some of the included books are hardbacks while others are paperback copies of novels from great authors!

I’m honored to have my book, The Pursual, included in this wonderful giveaway. Other participating authors are –

Three additional authors are donating books from other well-known writers –